A Tribute to Two Dads

The anniversary of my Dad's death hit me hard this year. I don't know why.

No, I do. I'm depressed. So very fucking depressed. Not the boo-hoo kill myself kind of depression. No, this is the kind where I want to sob into a pillow, or dog flank, or Jeff's neck.

I avoided Dad's hoarded tool bench and organized tool box. I didn't let my eyes rest on his remaining clothing. I stayed out of the basement as best I could. I avoided all things Dad

...except for his jacket.

It's a warm thing with a softy fleece lining.  It has a hood. It feels like I'm wrapped in his embrace.

I can't even count the number of times I went outside late at night, sat down for a cigarette, and pulled that hood up so I could have a good cry. I'm torn between denial and acceptance.

This is why I hate December and January. We lost several dogs during those months. I have spent most of this year's December freaking out in fear of Jeff or Mum dying. Or one of our dogs.

In my quest to avoid All Things Dad Related, I found an old article from The Bemused Muse. It covered Father's Day. (It lacks the https:// stuff)

My Dad, George, is a quiet man. This is the first Father's Dad we have celebrated without my Dad (he and my Mum are back in Colorado still.) 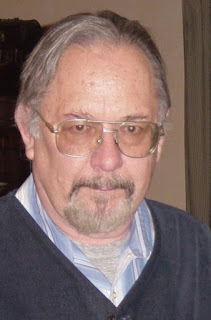 It was difficult, as I miss him greatly.

My Dad is a man of few words, preferring to listen. He, too, loves science fiction, but my Dad is not a sports fan. I don't even know if he could tell you what each state's major football team is (and I don't think he really cares.)

His father, George (sr.), was a boxer (pro, at one time) and drove around on a motorcycle. My father was a gymnastic hobbyist (before the knees went) and drives around in a silver Mercury Sable!

My Dad likes to tinker with gadgets, and rebuilds his computer on a somewhat quarterly basis. He loves Theatre (often serving as Technical Director during family operated productions), and is one hell of a fine public speaker (as long as he has his notes in front of him.)

He doesn't smile fully often, because he thinks his teeth are terrible (but when he does smile, it lights up a room, too!)

I am a Daddy's-Little-Girl, and an only child, so of course my Daddy is my super hero and teacher all rolled into one. I inherited my Dad's sarcastic sense of humor.

I can still remember all the fun things we used to do with each other, like play "three little pigs" every day when he came home from work... he was the big bad wolf, and I would always stifle my giggles and hide in my closet when I heard him come down the hall ("I'll huff, and I'll puff, and I'll blow this door down!") I was a stupid little pig... I always hid in the same spot in the closet.

My Dad cries during the scene where Bambi's mother dies. My Dad also cried at my wedding (which, of course, caused me to cry, which... of course, meant that I had racoon eyes from all the running mascara!) There is no one I'd rather have as my Father.

I celebrated Jeff's Dad, Doug, in the same article. He had come out to visit us all the way from Arizona.

We had a wonderful Father's Day today. Admittedly, we didn't do much, which is a very nice way to spend a lazy summer Sunday.

Dad helped me weed the backyard flowerbeds while Jeff retreated into the air conditioned house; he is still worn out from yesterday, and we both have sunburns on our necks and noses.

Later in the day, Jeff bar-b-qued a London broil (tenderized with rub and some of my marinara sauce), and we made twice-baked potatoes, and broccoli and onions.

We presented Dad with a Steelers' Terrible Towel (if you don't know what that is, I don't think I should ever be able to properly explain it!) Later, Dad and I sat on the front porch and enjoyed conversation. It was a beautiful day.

Jeff's Dad, Doug, is a delightful man - a true Southern Gentleman. He speaks softly, and can capture your attention in witty ways as he recalls things he has done in life. 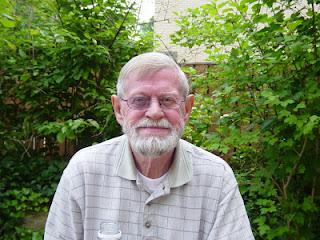 He was Air Force, and now works for the State of Arizona. Between those two jobs, he has done just about everything. He is a hard worker, and never hesitated to do what needed to be done to make ends meet.

He has known ups, and he has known downs, and all the while, he has kept his head and done his best to get through everything life throws at him.

He is always very polite, and will open doors for women. His smile lights up a room. He is a little shorter than Jeff, but they both have beautiful white hair (Jeff just keeps his close cropped so no one notices that he is balding, while his father still has a full head of hair!)

Dad loves to nap during football and baseball games, gets up at 2:30 am (before the hot Arizona heat sets in), and loves to read science fiction. There is no one I would rather have as my Father-in-Law.

No more losses for a good, long while, okay God?