Nobody wants to wake up to horrific news, especially when it involves death and injury of innocent people. 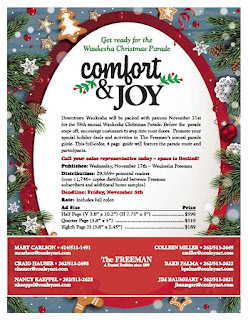 We woke up, grabbed a cup of coffee, and sat down to start the day. Every feed covered the massacre at last night's Christmas parade in Waukesha, WI.

This year's parade theme was "Comfort and Joy". Both were taken away in a matter of minutes by a thug with a mislaid moral compass.

There are indications the Waukesha suspect was fleeing another incident when he drove into the parade route, according to multiple law enforcement sources familiar with preliminary investigation findings. - CNN

The suspect, Darrell Edward Brooks Jr, turned onto that parade route. He had the option to brake. But God forbid he's caught by the police and go to jail for violating parole. 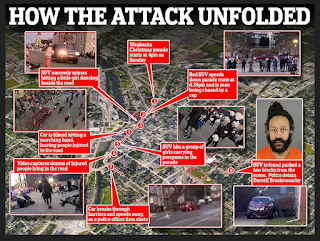 What is wrong with our society? The criminal justice system and its revolving doors amounts to nothing. Ethnicity really doesn't matter when it sinks to street level. This criminal element exists in big cities, small towns, farmland, and beyond. If there's a niche, reprehensible people will fill it.

The BBC often shows images or video not available in the US.  The screams that followed the aftermath are gut-wrenching. The quotes below are part of that article.

The suspect appeared to have been fleeing another scene when he ran into people at the parade, the law enforcement official, who is familiar with the early findings of the investigation, told the BBC's US partner CBS News.

So Brooks knew he violated his parole. He bolted from the domestic disturbance scene and visited horror upon innocent parade folk. He then drove away from that scene, leaving a wake of grief.

Darrell Brooks Jr is a piece of shit is a wannabe rapper with a lengthy criminal history. His uploaded "music" videos depict him trying so hard to gain an ounce of street cred. He flashes AK-47 type weapons and bling that really isn't bling if you look closely.

Brooks also has two open felony cases for which he was released on $500 and $1,000 bail, the latter just days before the parade deaths. He was alleged to have run over the mother of his child during a domestic dispute earlier in November. He was also out on bond in that case. Yes, he did it with an SUV.

I have a sick feeling that people might excuse his actions last night because "The police didn't have to chase him!" or "He was afraid of cops!"

The police have already stated that they were not in pursuit. Brooks was involved in a domestic; the police could not respond to the domestic scene because units were redirected to the parade aftermath. In other words, Brooks chose to do what he did. No one forced him to do it.

That is little comfort to friends and family enduring this atrocity.

One father stated that he had to go from one crumpled body to the other in search of his daughter. The route was littered with pom-poms and shoes.

A bystander with her two children stated that she saw "a red blur" and then saw "little girls flying through the air".

This is the stuff of nightmares.  I really can't imagine the deep level of pain these parents endure today.

[T]here was silence, followed by screaming, running and checking on those injured after the vehicle hit a dance team of girls aged between about nine and fifteen.

This dance team and the band never heard the vehicle coming. It struck them from behind as they played a Christmas song. Brooks never slowed his speed.

But children weren't the only victims.

The Milwaukee Dancing Grannies said some of its members "were impacted and we are waiting for word on their conditions". "Please keep the Grannies, all those injured, and all those who witnessed this horrible event in your thoughts and prayers," the group wrote on its Facebook page.

He might be charged with five counts of first degree intentional homicide, with additional charged based on the investigation, according to Waukesha Police Chief Dan Thompson, as reported by CNN.

How much time do you get for first degree intentional homicide in Wisconsin?

No more revolving door. No more special interest groups involving themselves. No more Asshat pundits trying to cloud people's perspective. No more "thoughts and prayers" from people that don't bother to pause and pray.

Nobody wants to take responsibility for horrific actions, especially when it involves death and injury of innocent people. We need to change that. This change must come from within.