I'm giving it another try. Round Two, y'all.  I'll stop at 3Below and pick up again with Wizards. I'll end it there, too.

Krel's whining about being unpopular drove me nuts in 3Below. His sister, Aja, doesn't care enough to pronounce common words correctly. It's like a 30-Sue Pileup*.  (On the other hand, I absolutely adore Varvatos Vex, the "Mom and Dad Blanks", Zadra, Buster, and Stuart.)

The final chapter after Wizards, a movie titled Rise of the Titans, pissed me off so intensely that I completely stopped watching the entire Tales of Arcadia series. Prior to that, I kept shit on repeat and regulated it to background noise.

The massive RETCON is to blame. "Titans" is the poster child for bullshit. It's heavily revised retrospectively, smashing everything prior by changing the very first action... one that sets everything in motion.

Why go back and watch a series if everything we know and love - all that is canon - is wiped away? The struggles are gone, as is character growth. The alliances vanish. Merlin choosing Jim because "in all of the world, I chose you" doesn't make sense. Sure, Toby might find the amulet, but I suspect (and hope) it would keep repeating Jim's name. 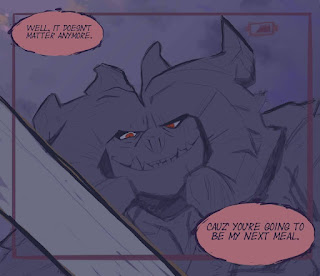 We'll see how it goes.