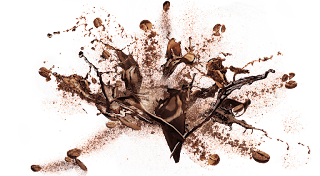 There are good mornings, and then there are mornings that grab you by the throat and hiss I'm about to kill a bitch. This morning is the latter.

It started with cracking my head against the metal shelf by the toilet.  This isn't the first time. It won't be the last. Thankfully, it didn't split my scalp.

The adventure continued when I lost balance and slid down three stairs. My lower back hit each tread's nosing.  Holy fuck, the pain! I stayed on the floor and rubbed around the scar from my laminectomy, softly crying my eyes out while the dogs pawed at me. You're on the floor! Play with us! No. Just no. I don't have vertebral bone on my L4 and L5. Impacts directly, well, impact my lower extremities.

I hauled my fat ass upright. God, I need to lose weight! The next few minutes were spent wiping tears and snot off my face. The dogs began to circle. Food? Food?! Food food food!

Nothing is going to happen until I set my coffee to perk. I did alright with filling the percolator. Ditto with adding the coffee. And then I reached for the diffusion basket...

It was there. Resting. Waiting. Planning my demise. Muahahahaaaa.

I realize that earwigs play an important part in our lives. That doesn't make it alright to hide in my perk parts. I didn't have a can of hairspray. I did have a teaspoon.

Teaspoons are not very good insect smashers. I hit the damn monster twice with it and didn't kill it. Fortune was on my side. The menace fell into the sink and darted towards the drain. I helped it along with some scalding water.

I turned to find all the dogs staring at me. Food?

Biscuits in hand, I walked out the door, hitting my port shoulder on the jamb. Yay! Food! I figure nothing could get worse than it already was.

Patience noped out minutes later. I added sugar to my big mug and then poured chicken broth into the cup.

Little things like this scare me. Is it dementia? Or earwigs inside my brain? Or Parkinson's?

The latter is frightening. I watched my dad degrade. Now that I'm back upstairs (without further injury!), depression starts to gnaw at me.

An hour passes. Then two. The fam went grocery shopping. Zoie usually dissolves into a puddle of angst. Surprisingly, she barked a few times and then came when I called her. All my pups are upstairs - no whining or attempts to leap the gate. I'm shocked.

Is good karma with me? I I fixed the china cabinet's shelf pegs. Don't get excited. I put new pegs in. The end result was a shelf one notch higher than previously. Nothing broke, fell, or tried to commit suicide in my hands.

It took under a minute to slip the metal into the holes but it felt like I had run a marathon. Pain shot down both legs as I tried to navigate the stairs.

The Discord of Dogs are all currently in my office. Little dog doughnuts dapple the chair and floor cushions. Who drugged them?!

Who can drug me?! I have a T3 and a oxycodone on board. Killed the neck pain but did nothing for the butt and legs.