A Discordant of Dogs: Nail Trim 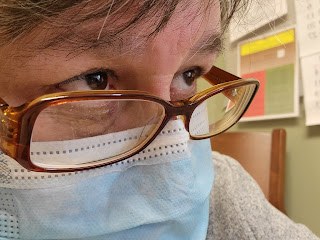 Do you see that face? Eyes one centimeter shy of a roll? It was that kind of morning.

We had forewarning. I set this nail trim appointment weeks ago. I spent a bit of time mitigating all chances for catastrophic fail. By that, I mean stuffing a pillow behind the front passenger seat and my purse behind the driver's seat in order to prevent asshats from going under them.

The best laid plans of mice and men...

A Discordant of Dogs
We don't have a pack. Rather, ours is a writhing dogmageddon comprised of fur, coughs, screaming, and tangled leashes. Ware the approaching Discordant! It is profane and no thing is left untouched! It is more a violation of sanity".

We have four dogs. Alone, each dog somewhat behaves itself while traveling. Jointly, God help you. All of them want to be on Jeff's lap rather than remain in the back seat. Some of them suspect that we are going to the vet. Jeff's "GET BACK HERSHEY!" punctuates the whines and moans coming from behind us.

The Discordant will eventually settle down. This usually happens about two miles away from our destination.

The Vet
We love our vet. We've been with them since 2005. And they Know. Oh yes. All the world senses our approach and locks its door. But the vet stays open, welcoming, patiently awaiting us.

We arrived to find no other vehicles or patients. It was as if they cleared the schedule to accommodate us.

The leashed portion of this mess pulled me towards grass shaded by a massive maple. What exciting smells! Now is the time to pee and poop, and smell and sniff and hum. They do alright  as we walk towards the building.

And then we're at the door and the bell dings and the Desecration realizes that we have arrived at a place too holy for their nonsense.

I suppose it's the ultimate Oh shit! moment for most dogs.

Taking them all at once does have benefits. Angus won't scream. Hershey won't bark. Neither wants to be mauled by the other. Not here. Not in a place where bullshit isn't tolerated.

The appointment is over in a blink. Nails trimmed, we retreat back to our car. The Discordant is subdued and deflated. The silence is pure bliss.