A small dog in a big world 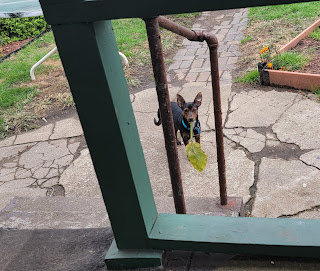 She's a small dog in a big world
and she loves every minute of it!

We thought about getting another Pomeranian. Scouring the Pommy rescue organizations proved futile. Yes, there are Pommies there. The cost to rescue them is on par with buying one from a puppy mill1.  The mills prosper.

My love for Angus prodded me into searching for another Dachshund-Chihuahua mix. We adopt only from legitimate rescue organizations, many of which utilize Petfinder. And so, after a search, I came across Heggy. 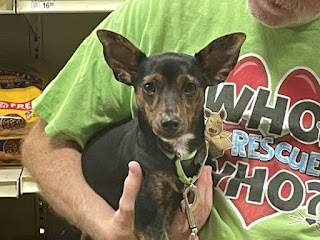 Who can say 'no' to that sweet face?!

Heggy was with LUV4K9s Rescue2. You can still see her listing here.

Heggy is a female puppy (born March 2021) Dachshund, Min Pin, Chihuahua mix as our best guess rescued as an owner surrender She is full of puppy energy and spirit. She loves toys and playing with other dogs. She is also a snuggler and likes loving on her humans.

That's putting it mildly! Her spirit is indomitable. She's still settling in. Her new brothers actually played with her without much prompting.  They share the bed, their toys, and their annoying barking moments.

We don't know much about Heggy's past. Sadly, her prior owner had a terminal illness and turned to LUV4K9s. I'm sort of wondering if she didn't disclose where she got Heggy.

A bit of research and debate with knowledgeable friends yielded an answer: Heggy is a Harlequin Pinscher. No Dachshund or Chihuahua in her.

Um...alright, I guess? She's black and brindle with a bit of white to her. 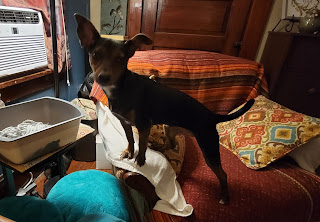 Better Half wanted to change her name. We finally settled on Zoie (zoh-ee) but I gave her the last name of "von Heggy". In truth, I kinda liked Heggy for her name.

Zoie is an escape artist, eats seed dropped by the birds, patrols her yard like a boss, and really loves to snuggle. But she also loves learning new things. I think we'll do a bit of training this weekend and next week.

Also, my mother loves her. She used to have min pins back in the day.

And there you have it!

A puppy mill is an inhumane high-volume dog breeding facility that churns out puppies for profit, ignoring the needs of the pups and their mothers. Dogs from puppy mills are often sick and unsocialized. Puppy mills commonly sell through internet sales, online classified ads, flea markets and pet stores. In fact, the majority of puppies sold in pet stores and online are from puppy mills. Responsible breeders will be happy to meet you in person and show you where the puppy was born and raised—and where their mom lives too.

Mother dogs spend their entire lives in cramped cages with little to no personal attention. When the mother and father dogs can no longer breed, they are abandoned or killed. Due to poor sanitation, overbreeding and a lack of preventive veterinary care, the puppies from puppy mills frequently suffer from a variety of health issues, creating heartbreaking challenges for families who should be enjoying the delights of adopting a new family member.

- The The Humane Society of the United States 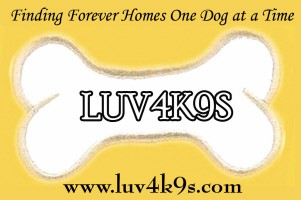 Luv4K9s is a non-profit rescue that is run entirely by volunteers. Our goal is to find "forever families" for our very deserving dogs. Our dogs range from puppy mill rescues, owner released dogs to abandoned and abused dogs. (click on the image above to visit their site)