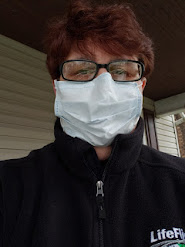 Hello. I'm Toni. Welcome to the ramblings of a gruff chick. Don't let the badly dyed pandemic hair mislead you. I left my 30s a long ago and haven't looked back since. I earnestly believe this is due to a crick in my neck.

Or dementia. It runs in the family.

Better Half (Jeff) and I have been married over 25 years. No kids but plenty of dogs. We've had our share of adventures, moving from Colorado to Ohio, my battle with cancer, Better Half's heart woes, walking away from our dream to care for my ailing father, both of our fathers passing, and losing Better Half's mom this year.

It's been an interesting but also fun trip through trials and tribulations. We tend to combat gravity with levity.

We live in an old house with old wiring, old pipes, and a very old kitchen. This puts a dent in my recipe sharing and product reviews. Gone are the Pembroke Cottage days. Ah, well. Such is life.

If you've been a follower since the Bemused Muse era, you know that I sometimes tuck dry humor and deadpan delivery between the lines. There isn't any tone in print. It might be difficult to tell my satire apart from a pessimistic view. I proudly embrace the former.

Please do not take my commentary on religion, social issues, or politics as a personal attack on you. (The fact that I actually have to reinforce this is pretty sad.) Please also understand that I sometimes play devil's advocate.

There is one topic that I try to avoid: Trump. I've hated him since the 1980s. I'm a former Republican. My views haven't changed much. If you're curious about where I fall in the political spectrum, feel free to read "Unpacking the Misconception Trunk".

As always, thank you for visiting today. I appreciate it. If you'd like to see a topic covered, don't hesitate to ask:  Contact

My pseudonym is not GruffCock. I've passed fifty so it might be more appropriate to call myself GruffHen. HA! I actually like the way that sounds!

I did have a total hysterectomy with salpingo-oophorectomy in 2019. I suppose the only bits that I have left are the large tracts of land up top. Still female.

It's an opossum at the moment. Decades ago, it was a wolf. Then wolves got popular and everyone adopted it as their own totem. Then I chose ravens. Those became popular. Nobody wants an opossum as a totem animal - yet. My second totem are grackles.

"Do you have hobbies?"

I did guest star as the main antagonist of a 2017 British horror film. Other than acting, I enjoy giving people hallucinations. I also enjoy dragging mentally shattered, guilt-ridden people to my timeshare in northern Sweden.
I want to learn how to knit something other than 3"x10" given-up-on scarves.
I also want to finish writing a book started in January 2020.

"Where do you live?"

In a house. I might someday end up living in a box. Or at my timeshare. (see above)

I reside (currently) in Ohio.

"Do you use social media?"

You can send a message to me via the Cache: The Gruffchick Cache